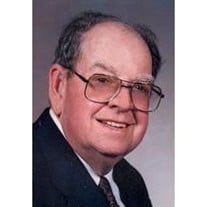 Arthur J. Flanagan, 87, of Methuen, died peacefully Wednesday, January 23, 2013 at Mary Immaculate Nursing Restorative Center in Lawrence, MA. Arthur, son of the late John J. and Loretta (Schiller) Flanagan, was born in Lawrence. He attended St. Augustine?s Grammar School in Lawrence and graduated from Central Catholic High School and Merrimack College, where he received his Bachelor of Arts in Business Administration. He proudly served in the U.S. Navy during World War II. He was an accountant and auditor for many years at the U.S. Army Natick Labs, Fort Devins, and finally at Jeanne D?Arc Credit Union until his retirement. He also served as a warden for local precinct elections. Arthur was a member of the Knights of Columbus, Council #4027, Merrimack College Alumni, St. Augustine?s Holy Name Society, and was a communicant of St. Monica?s Church in Methuen, MA. He was also a member of the PCSA (Patrol Craft Sailors Association), with whom he traveled the country with his wife. In his free time, he enjoyed camping with his family. Arthur will be deeply missed by his beloved wife of 57 years, Ruth C. (Quinn) Flanagan; his children, William J. Flanagan and his wife Susan of Belmont, MA, Maura K. Pennisi and her husband Richard of Windham, NH, Brian A. Flanagan and his wife Rhonda of Salem, NH, Kevin F. Flanagan of North Conway, NH, and David E. Flanagan of Salem, NH; and his four grandchildren. Family and friends will honor and celebrate Arthur?s life by gathering for his Funeral Mass at St. Monica?s Church, 212 Lawrence St., Methuen on Monday, January 28, 2013 at 11 AM. Burial will follow in St. Mary - Immaculate Conception Cemetery, Lawrence, MA. Visiting hours will be Sunday in the KENNETH H. POLLARD FUNERAL HOME, 233 Lawrence St., Methuen from 2 to 6 PM. In lieu of flowers, memorial contributions may be made to the Mary Immaculate Nursing Restorative Center, 172 Lawrence St, Lawrence, MA 01841. Arrangements have been entrusted to the care of Kenneth H. Pollard Funeral Home, Methuen.

The family of Arthur J. Flanagan created this Life Tributes page to make it easy to share your memories.