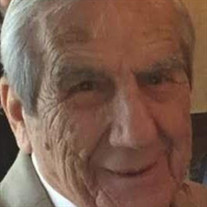 Armand (Ray) Persichetti 95, of Lawrence, MA died peacefully on October 25, 2021. Known to most people as Ray, he was the son of John and Mesia (Celli) Persichetti. Ray was born, raised, and educated in Lawrence, MA. During his teenage years, Ray worked with his father in a family-run market in Lawrence that he later went on to manage. At the age of 15, Ray began playing the drums in bands in local area establishments in the Merrimack Valley. Ray enlisted in the U.S. Army in the 79th First Field Artillery Battalion at the age of 18. While in active service, Ray pursued his interest in music by attending band training school. Upon his honorable discharge from the Army, Ray received several decorations and citations, including a Good Conduct Medal, American Theater Ribbon, and World War II Victory Ribbon. At the age of 20, Ray joined the Lawrence Musicians Union as an orchestra leader and established the Ray Milton Orchestra. For over 50 years, Ray and his band played for various events and special occasions, including weddings for his own son and his niece. Ray remained an active member of the Lawrence Musicians Union. On June 17, 1951, Ray married the love of his life, Alice (Hajjar) Persichetti. Ray and Alice were life-long residents of Methuen, MA where they provided a loving home for their children. Ray and Alice were an endearing couple who devoted their lives to their family, relatives, church, and friends. Their hearts and home were always open to everyone, and they hosted annual family reunions for over 30 years. Ray was a devoted husband to Alice as they shared 66 years of marriage until she passed in July of 2017. Ray also worked as an insurance agent at Metropolitan Life for over 20 years. Upon his retirement, he became a member of the Big Brother/Big Sister Association of Greater Lawrence where he provided his wisdom, guidance, and encouragement to at least three “little brothers.” In 1992, Ray received the Big Brother of the Year award. Ray will be deeply missed by his children Stephen, Raymond, Gary, and Cynthia, his daughters-in-law Rita, Linda, Margaret, and Gayle, his grandchildren, Nathan, Matthew, Amanda, Jamin, Michael, Laura, Justine, Alex, and Paul, and his great-grandchildren, his 97-year-old sister, Ann Russo, and nieces and nephews. The family would like to extend special thanks to the caring staff at Marguerite’s House Assisted Living in Lawrence, where Ray was a resident for the past three years, his Element Care team, and Nevins Nursing. Calling hours will take place at St. Joseph’s Church, 241 Hampshire Street, Lawrence, MA on Saturday, Oct. 30, 2021 beginning at 10:00 a.m. followed by a funeral mass at 11:00 a.m. at the church. Private burial will follow at United Lebanese Cemetery, Lawrence. Memorial donations can be made to The Ray and Alice (Hajjar) Persichetti Scholarship at St. Joseph’s Church in Lawrence. For directions and online guestbook, please visit the funeral home website, www.pollardfuneralhome.com. The Kenneth H. Pollard Funeral Home is honored to serve the Persichetti Family.

Armand (Ray) Persichetti 95, of Lawrence, MA died peacefully on October 25, 2021. Known to most people as Ray, he was the son of John and Mesia (Celli) Persichetti. Ray was born, raised, and educated in Lawrence, MA. During his teenage years,... View Obituary & Service Information

The family of Armand "Ray" L. Persichetti created this Life Tributes page to make it easy to share your memories.