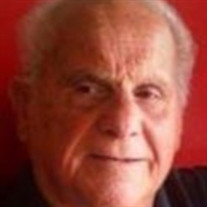 Anthony F. “Tony” Norcia, 94, passed away peacefully on Monday, March 30, 2020 after a brief illness. Mr. Norcia was a lifelong resident of Methuen MA. He was born on February 10, 1926. He was the son of the late Michael and Angelina (DeNuncio) Norcia. He would always tell his grandchildren the story of how the neighbors had to shovel Thornton Avenue after a big snow storm so the doctor could get to the house to deliver him. The same Thornton Avenue he would call home the rest of his life. Anthony, or Tony as he preferred to be called, attended Methuen schools including Searles High School. It was at Searles where he met his wife Rose (Calderone) Norcia. Tony and Rose would marry on June 9, 1946 and would go on to celebrate 73 years as husband and wife. As a young man Tony worked on the family farm. Knowing that farming was not for him he worked many different jobs through his younger years. One of those jobs included a stint as a mason. During this time he and Rose built their own home on Thornton Ave and Tony would always boast how he built the foundation for that home. For a time Tony also worked at the former Ford plant in Somerville MA now known as Assembly Row. As his luck would have it shortly after starting at the Ford plant, a job which he would fondly reflect back on as one of the best he ever had, the company decided to close up shop in MA. Having had just started a family with Rose and being the only child of his parents Tony balked at the opportunity to follow Ford to Michigan and stayed in Methuen. It was shortly after this he began working for Sun Ray Bakery as a route sales driver. He worked many years for Sun Ray before starting his own wholesale bakery product sales business Norcia Pastry. He would run this business until his retirement in 1989. In his retirement Tony enjoyed travelling the country with his wife in their beloved motor homes. In the summertime they spent many weekends at Salisbury and Hampton beaches. They would often take long bike rides along the coast from wherever they had parked their motor home. They traveled across U.S., coast to coast twice. For many years they would call Largo, Florida their winter home. In Largo Tony and Rose made many friends and Tony joined the Seminole Elks Lodge #2519 and he would also later become a member of the Lawrence Elks Lodge #65. His entire life Tony always enjoyed travelling by road. In the early years it was in one of his precious Pontiacs then eventually in one of several motor homes he and Rose would own. These last several years it was Rose who did the driving often taking Tony to Newburyport, Salisbury and Hampton Beach. Tony always had the gift of gab and would strike up a conversation with just about anyone. Up until recently people would often recognize him as the “bread man” who used to deliver to their house years ago or the “donut guy” who used to deliver to numerous businesses in the Merrimack Valley. He will be missed by many. Tony is survived by his wife, of 73 years, Rose. His two children, daughter Joyce (Cabuzzi) Gonthier and her husband Roger of Danville NH and son Michael Norcia and his wife JoAnn of Londonderry NH. Tony also leaves behind five grandchildren: Kevin Cabuzzi and his significant other Charlene Morin of Methuen, MA; Jolene (Cabuzzi) Beaulieu and her husband Stephane of Hudson, NH; Gina (Cabuzzi) Bozek and her husband Joe of Danville, NH; Michael Norcia of ME and Jeffrey Norcia of NH. Six great grandchildren: Brittany Cabuzzi, Courtney Cabuzzi, JR Bozek, Benjamin Bozek, Angelina Beaulieu and Gianna Bozek. He is also survived by many cousins, nieces and nephews in the Norcia and Calderone families. The family would like to take this opportunity to thank the amazing nurses at Lawrence General Hospital for their care of Tony and to the entire staff at the Nevins Nursing and Rehab Center for their compassionate and empathetic caring of not only Tony but also of his immediate family. All services will be private. The family asks that you reflect on a personal memory of Tony or perhaps raise a glass in his honor. Scotch was his favorite. In lieu of flowers please make a donation to the Nevins Nursing and Rehab Center, 10 Ingalls Ct. Methuen, MA. 01844. For online guestbook, please visit the funeral home website, www.pollardfuneralhome.com. The Kenneth H. Pollard Funeral Home is honored to serve the Norcia Family.

The family of Anthony F. "Tony" Norcia created this Life Tributes page to make it easy to share your memories.