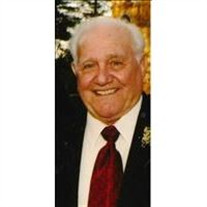 Anselmo Palermo, 95 of Methuen and formerly of Lawrence, passed away at his residence on his 64th wedding anniversary, September 3, 2014. Anselmo was born in Lawrence to the late Joseph and Rosemary Palermo. He was a graduate of Lawrence High School, Class of 1936. Following his graduation of Lawrence High School, Anselmo proudly volunteered to serve his country during WWII in the United States Navy. He fought on Pearl Harbor in December 1941. Anselmo also served during the Battle of Midway and the Battle of Guadalcanal. He loved baseball and football. Anselmo was the beloved husband of Mildred (Sapienza) Palermo of Methuen with whom he shared 64 years of marriage. He was the devoted father of Ronald Palermo and his wife Karen of Salem, NH, Joan Chase and her husband Bill of Medway, Thomas Palermo and his wife Cassie of San Jose, CA, John Palermo of Methuen, Robert Palermo and his wife Donna of Salem, NH, the late Janice Palermo and the late Kenneth Palermo and his former wife Sue. Anselmo was the dear brother of Rita Gregg of FL, Mildred Testa of Goffstown, NH, the late Tony Palermo, the late Ralph Palermo, the late Dot Gaiolois, the late Angie Grelli, and the late Phyllis Parolisi. He was the cherished grandfather of Kenneth, Jennifer, Laurie, Angela, Krystine, Melissa, Rohn, Nicholas, Olivia, Leo, Jeffrey and Lindsay. He is also survived by many nieces and nephews. Friends and guests are invited to call on Friday, September 5, 2014 at the Kenneth H. Pollard Funeral Home, 233 Lawrence St. Methuen, MA 01844 at 4:00 PM until 8:00 PM. A Mass of Christian Burial will take place on Saturday, September 6, 2014 at St. Lucy's Parish of Methuen at 9:00 AM. Interment with full Military Honors will follow at St. Mary's/Immaculate Conception Cemetery of Lawrence. For directions and online guestbook, please visit the funeral home website, www.pollardfuneralhome.com. The Kenneth H. Pollard Funeral Home is honored to serve the Palermo Family.

Anselmo Palermo, 95 of Methuen and formerly of Lawrence, passed away at his residence on his 64th wedding anniversary, September 3, 2014. Anselmo was born in Lawrence to the late Joseph and Rosemary Palermo. He was a graduate of Lawrence High... View Obituary & Service Information

The family of Anselmo Palermo created this Life Tributes page to make it easy to share your memories.

Anselmo Palermo, 95 of Methuen and formerly of Lawrence, passed...