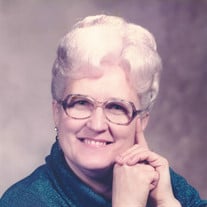 Anita (Michaud) Potvin, 90 of South Lawrence, passed away on Wednesday, October 10, 2018 at Salemhaven Nursing Home in Salem, NH. She was the beloved wife of the late Romeo Potvin. Born in Cabano, Canada on February 9, 1928, she was the daughter of Andre and Irene (Tremblay) Michaud. She worked as a machine operator at Malden Mills in Lawrence for many years until her retirement. Anita was an active communicant of the former Sacred Heart Church in South Lawrence. Every Tuesday evening, she was a loyal attendant of their prayer meeting. In her free time, she enjoyed crafts, cross stitching, and especially spending time with her grandchildren and family. Anita will be deeply missed by her 7 children, Jean-Yves Potvin and his wife, Carol of Lawrence, France Mansur and her husband, Charles of Florida, Jacques Potvin of Montreal, Canada, Mario Potvin and his wife, Kandice of North Andover, Danielle Collum and her husband, Howard of South Carolina, Michel Potvin and his wife, Theresa of Salem, NH, and Nathalie Ouellette and her husband, Jedson of Derry, NH; her sister, Yvette Dumont of Quebec, Canada; 3 brothers, Jean-Philipe Michaud of Montreal, Canada, Normand Michaud of Montreal, Canada, Jean-Claude Michaud of Montreal, Canada, and Joseph Michaud of Florida; her son-in-law, Nicholas Dupuis of Windham, NH; and many nieces and nephews. She is predeceased by her daughter, Micheline Dupuis, and 2 brothers, Armand and Gerard Michaud. Family and friends will honor and celebrate Anita’s life by gathering for her calling hours at the Kenneth H. Pollard Funeral Home, 233 Lawrence Street in Methuen on Sunday, October 14, 2018 from 2 - 6 PM. Her Funeral Mass will be celebrated at 9:00 AM on Monday at St. Monica’s Church, 212 Lawrence Street, Methuen. Entombment will follow at St. Mary/Immaculate Conception Cemetery Mausoleum in Lawrence. For directions or to send a condolence to Anita’s family, please visit www.pollardfuneralhome.com. The Kenneth H. Pollard Funeral Home is honored to serve the Potvin family.

Anita (Michaud) Potvin, 90 of South Lawrence, passed away on Wednesday, October 10, 2018 at Salemhaven Nursing Home in Salem, NH. She was the beloved wife of the late Romeo Potvin. Born in Cabano, Canada on February 9, 1928, she was the daughter... View Obituary & Service Information

The family of Anita (Michaud) Potvin created this Life Tributes page to make it easy to share your memories.

Anita (Michaud) Potvin, 90 of South Lawrence, passed away on...