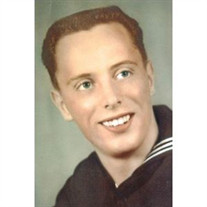 Alfred ?Al? Marotta Jr., 75, of Tewksbury, MA passed away peacefully at the Grace House in Windham, NH on June 3, 2017. Al was born on May 22, 1942 in Revere to the late Alfred and Rose (Mistretta) Marotta Sr.. Shortly after graduating from Revere High School with the Class of 1959 he joined the United States Navy where he served honorably for six years. After his service to country he settled in Tewksbury to raise his family. He worked as an insurance agent for Allstate Insurance for 20 plus years then opened the A. Marotta Insurance Agency in Wilmington, MA in 1989 with his son and partner Cliff Marotta. Al was a member of the Wilmington, MA Knights of Columbus and a lifelong member of the Veterans of Foreign Wars Post #2458 in Wilmington. He was an avid golfer and a member of the Andover Country Club. In addition to his love of golf, he spent much of his time as a hockey coach and referee in the Tewksbury Youth Hockey Program. Al was a devoted family man who touched many lives and will truly be missed. He was predeceased by his son Alfred Marotta III and is survived by two sons, Clifford and his wife Kimberly Marotta of Windham, NH, Gary and his wife Jean Marotta of Canton, GA and one daughter, Wendy Marotta (Ret.) Lt. Col. USMC of Kailua, HI. Al was the proud grandfather to ten cherished grandchildren; Mark, Andrew, Olivia, Ryan, Adam, Joseph, Ashley, Michael, Logan, and Gavin. He is also survived by his sister Rosalie Lapia of Georgia and several nieces and nephews. Calling hours will be held on Thursday June 8, 2017 from 4 -7 PM at the Kenneth H. Pollard Funeral Home, 233 Lawrence Street, Methuen, MA. Services will be held at the conclusion of calling hours. In honor Alfred?s wishes, interment will be held privately. In lieu of flowers, contributions may be made in Alfred?s memory to the Veteran of Foreign Wars Post # 2458, 383 Middlesex Ave, Wilmington, MA 01887. For directions to the funeral home or to sign the online Guest Book please visit www.pollardfuneralhome.com. The Kenneth H. Pollard Funeral Home is honored to serve the Marotta family.

Alfred ?Al? Marotta Jr., 75, of Tewksbury, MA passed away peacefully at the Grace House in Windham, NH on June 3, 2017. Al was born on May 22, 1942 in Revere to the late Alfred and Rose (Mistretta) Marotta Sr.. Shortly after graduating... View Obituary & Service Information

The family of Alfred "Al" Marotta Jr created this Life Tributes page to make it easy to share your memories.