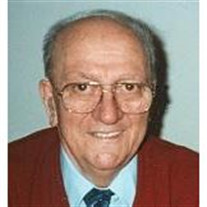 Haverhill, MA- Alfred A. Chiarenza, 90, formerly of California, died Tuesday, September 1, 2009 at the Wingate in Haverhill. Born on May 3, 1919 in Lawrence, Alfred was the son of Giuseppe (Joseph) and Frances (Gullo) Chiarenza. He was educated in the Lawrence Public School System and a graduate of Lawrence High School. Alfred lived in the Los Angeles area for almost twenty years, retuning to MA in the early sixties. Alfred was an entrepreneur who owned and operated numerous businesses in CA and MA. Alfred was a volunteer at St. Augustine?s Parish in Andover for many years. Pre-deceased by his wife, Dorothy (Muenzner) Chiarenza, Alfred will be sadly missed by his daughter, Kathleen T. Mikilitus and her husband James J. of Salem, NH, niece Barbara A. Lohmueller of Hampstead, NH, and her children, Kirk Lohmueller and his wife Charlene and their son Wally of Ithaca, NY, Jason Lohmueller of Hampstead, NH and Elisabeth Lohmueller of Ashville, NC, brother-in-law, Edward Billewicz of Hampstead, NH and his son Edward Billewicz and his longtime companion Brenda of E. Windsor, NJ, brother in-law William and his wife Diane of CT, and their children William Jr., Randy, Edwin, Stefan and Linda, as well as their spouses Melinda, Melissa, Nancy and John. He also leaves behind his favorite ?grandchildren? Casey, Jake, Barney, Riley, Lucy, and Jesse. ARRANGEMENTS: Family and friends may pay their respects on Thursday September 10, 2009 from 4:00 P.M. to 8:00 P.M.at the Kenneth H. Pollard Funeral Home, 233 Lawrence St. in Methuen. A Funeral Mass will take place on Friday at 9 AM at St. Monica?s Church in Methuen. Burial will follow at Elmwood Cemetery in Methuen. In lieu of flowers, donations may be made to the American Cancer Society, Memorial Giving Program, 30 Speen St. Framingham, MA 01710.

Haverhill, MA- Alfred A. Chiarenza, 90, formerly of California, died Tuesday, September 1, 2009 at the Wingate in Haverhill. Born on May 3, 1919 in Lawrence, Alfred was the son of Giuseppe (Joseph) and Frances (Gullo) Chiarenza. He was educated... View Obituary & Service Information

The family of Alfred A. Chiarenza created this Life Tributes page to make it easy to share your memories.