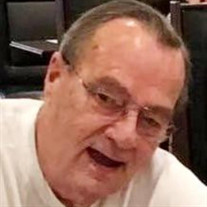 Albert St. Hilaire, Jr., 84 of Methuen, passed away on Tuesday, September 21, 2021 at Holy Family Hospital in Methuen, surrounded by his loving family. He was the beloved husband of the late Shirley (Poulin) St. Hilaire. Born in Lawrence on January 30, 1937, he was the son of the late Albert and Elizabeth (Lemieux) St. Hilaire. Al attended Central Catholic High School in Lawrence and then received his bachelor of science at Fitchburg State University in 1976. He proudly served his country in the U.S. Army during the Korean War. He worked as an engineering manager at Raytheon Technologies for 37 years until his retirement. After his retirement, Al travelled extensively with his wife through Europe, especially Austria, visiting many places where the “Sound of Music” was filmed. In recent years, he was a volunteer at the Nevin’s Nursing Home, bringing cheer to the residents. He often said, “If I can make one person smile, it’s worth it.” He also enjoyed spending time with the regulars at the Country Kitchen in Methuen, which he considered his home away from home. Al especially loved spending time with his family. He was very proud of his grandchildren’s accomplishments. Al will be deeply missed by his three children; his daughter, Cheryl Norris, and her husband, Bo, of Methuen, his son, Michael St. Hilaire, and his wife, Lorraine, of Methuen, and his daughter, Linda Guittarr, and her husband, Mark, of Derry, NH. He was the proud grandfather to his four grandchildren; Alex, Rachel, Shelley and John. He was the proud uncle to many nieces and nephews, especially Pauline Riccio and her husband, Randall, of Haverhill. Al also leaves his two grand dogs, Mandy and Ryder. He is predeceased by his son, William St. Hilaire, and his sister, Jeanette Pitts. All services for Al were privately held. To honor Al’s memory, please make a contribution in his name to Nevins Family of Services, 12 Ingalls Court, Methuen, MA 01844. To leave an online condolence, please visit www.Pollardfuneralhome.com. The Kenneth H. Pollard Funeral Home is proud to serve the St. Hilaire family.

Albert St. Hilaire, Jr., 84 of Methuen, passed away on Tuesday, September 21, 2021 at Holy Family Hospital in Methuen, surrounded by his loving family. He was the beloved husband of the late Shirley (Poulin) St. Hilaire. Born in Lawrence... View Obituary & Service Information

The family of Albert St. Hilaire Jr. created this Life Tributes page to make it easy to share your memories.