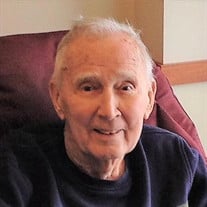 Albert E. Hoffman, 95 of Methuen, passed away peacefully on March 4, 2018 at the New Hampshire Veteran’s Home, Tilton, NH. He was born in Methuen, Massachusetts on November 24, 1922, son of the late Albert J. Hoffman and Minnie (Seifert) Hoffman. He graduated from Edward F. Searles High School, class of 1941. He later attended Fitchburg State College and earned a Master’s from Salem State College. Al enlisted in the U.S. Army Air Force while a student at Lowell Textile and served ten years in the active and reserve forces. A machinist toolmaker by occupation, Al was a teacher in Gloucester HS, Greater Lawrence Vocational, Northeast Regional Vocational and Andover High School as well a visiting lecturer at the University of Lowell. He was awarded Andover High School Teacher of the Year award in 1980. Al served as president of the Methuen Boosters, Methuen Firefighters Union, Tenney Preservation Society, program director and president of Methuen AARP and treasurer of the Andover Education Association. He was also a life member of the Friends of the Nevins Memorial Library, the Tenney Preservation Society and The National Home Gardening Cub. Active in Boy Scouts all his life, Al attained the rank of Eagle Scout. For 20 years he was the Scoutmaster or Troop 52 at First Church Congregational in Methuen and was awarded the Silver Beaver Award. An active First Church member, he served many offices. He was elected Deacon Emeritus. He was a member of the original Methuen High School building committee and the building committee for Roger’s House, the First Church Parsonage. Al had been a winter resident of Daytona Beach, Florida. He was predeceased by his wife Phyllis A (Lord) Hoffman, a son, Robert E. and a daughter, Lois Elaine. He is survived by sons Richard A. (Carol) Hoffman of Spotsylvania, VA and Russell B. (Sirai) Hoffman of Las Vegas, NV, six grandchildren and two great grandchildren as well as his long-time companion Johanna H. Devlieg of Londonderry, NH. Friends and guests are invited to call on Friday, March 23, 2018 from 10:00 AM until 11:00 AM at the Kenneth H. Pollard Funeral Home, 233 Lawrence St. Methuen. A funeral service will be held at the funeral home beginning promptly at 11:00 AM. Interment to follow at West Parish Cemetery of Andover. Donations may be made in memory of Albert Hoffman to the Cystic Fibrosis Foundation, 4550 Montgomery Ave. Suite 1100 Bethesda, MD 20814 or to the charity of one’s choice. For directions and online guestbook, please visit the funeral home website, www.pollardfuneralhome.com. The Kenneth H. Pollard Funeral Home is honored to serve the Hoffman Family.

Albert E. Hoffman, 95 of Methuen, passed away peacefully on March 4, 2018 at the New Hampshire Veteran&#8217;s Home, Tilton, NH. He was born in Methuen, Massachusetts on November 24, 1922, son of the late Albert J. Hoffman and Minnie (Seifert)... View Obituary & Service Information

The family of Albert E. Hoffman created this Life Tributes page to make it easy to share your memories.

Albert E. Hoffman, 95 of Methuen, passed away peacefully on March...