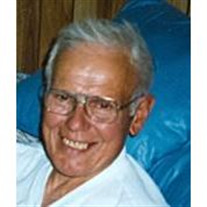 LAWRENCE ? Albert Baillargeon 87, of Lawrence died Sunday morning June 7, 2009 at the Nevins Nursing and Rehabilitation Center in Methuen surrounded by his family. Born in Three Rivers, Quebec, Canada, he was the son of Emile and Delia (GodBout) Baillargeon. Albert move to the United States as a child and resided in Lawrence for much of his life. He attended Lawrence High School and enlisted in the U.S. Navy during World War II aboard the U.S.S. Ajax. He received the World War II Victory Medal, the Asiatic Pacific Theatre Medal, Philippine Liberation Medal, the Good Conduct Medal and was honorably discharged. For over 40 years he owned and operated Al?s Service Station in Methuen, which is now owned by friend and former son-in-law Allan McClure. Known to his family as the ?Human Dynamo?, he was an avid fisherman and fly tier and loved spending time with his children, grandchildren and friends, He leaves his wife of 57 years Theresa S. (Berube) Baillargeon of Lawrence, MA. Daughters Mary Ann Pappalardo and her husband Paul of Methuen, MA, Suzanne Smerdon of Lawrence, Laura Jacques and her husband Kevin of Methuen, MA. Son Robert Baillargeon and his wife Dorothy of Lowell, MA. He also leaves his grandchildren Lisa Douglass and husband Sandy, Melissa Branco and husband Tom, Ryan and Jonathan Jacques and Marie Baillargeon. Great-grandchildren Kassie, Alexis, Madison and Janette. Several nieces and nephews and countless friends. Albert was pre-deceased by his brother Alfred Baillargeon. ARRANGEMENTS: Albert?s family would like to give special thanks to the Nevins Nursing Home for all their help this past year. In lieu of flowers, memorials can be made to a Charity of One?s Choice. Family and friends may call on Wedneaday from 4:00p.m. ? 8:00p.m. Funeral Mass will be celebrated on Thursday at 9:00a.m. at St. Monica?s Church in Methuen. Burial will take place at a later date.

LAWRENCE ? Albert Baillargeon 87, of Lawrence died Sunday morning June 7, 2009 at the Nevins Nursing and Rehabilitation Center in Methuen surrounded by his family. Born in Three Rivers, Quebec, Canada, he was the son of Emile and Delia (GodBout)... View Obituary & Service Information

The family of Albert Baillargeon created this Life Tributes page to make it easy to share your memories.