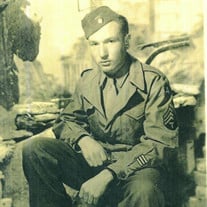 Albert “Al” I. Corn, 95, longtime resident of Methuen, formerly of Waterbury, CT passed away on March 7, 2019 at the Henry C. Nevins Nursing and Rehabilitation Centre in Methuen. Born on May 29, 1923 in Bialstal, Poland to the late Joseph and Dora (Frankfurt) Corn, he and his family immigrated to the United States, settling in Connecticut. Shortly after graduating from Windham High School in Willimantic, CT with the Class of 1941, Al felt the call of duty, like so many of his generation and enlisted in the United States Army in February of 1943. A decorated combat veteran who served at the invasion of Normandy and during the Rhineland campaign, he was honorably discharged from the military in December, 1945. After spending several years working for the family business in Waterbury, CT, he and his wife relocated to the Merrimack Valley, where he worked for nearly two decades at Raytheon until his retirement. A selfless, kind, and generous man, Al touched many lives and the legacy of his generation will forever by admired. Al was preceded in death by his beloved bride of many years, Maria (Desmond) Corn. He is survived by one sister and one brother. A graveside service for Al will be held on Wednesday, March 13, 2019 at 11 AM at the Elmwood Cemetery, 130 North Lowell Street, Methuen. Friends, family and everyone is invited to attend. In lieu of flowers, please make a contribution in Al’s memory to the Methuen Senior Activity Center, 77 Lowell Street, Methuen, MA 01844. To leave an online condolence, please visit www.pollardfuneralhome.com. The Kenneth H. Pollard Funeral Home is proud to serve the Corn family.

The family of Albert "Al" I. Corn created this Life Tributes page to make it easy to share your memories.